We reviewed best cordless rotary, orbital and dual action buffers and polishers available on the market!

A lot of people are gonna be questioning like, why do I need a cordless polisher? And where am I going to use this? But I think, this is something that’s going to be viable for you, especially, if you live in townhouse apartments or any kind of small apartment, where you park your car in a municipal garage and where you may not have electricity to use a corded power tool. And you’ve got to do everything, you know, in a kind of like a mobile fashion. Another thing is, let’s say you’re a mobile detailer and you made an appointment to do a couple of client’s cars. They left them outside the home and they were on vacation. You go to plug in your extension cord and the electrical outlet is dead because there’s a blown circuit breaker in the house and you can’t go in there to trip it.

So what are you going to do? Are you going to say no to the job and walk away, or you go in your van or truck, pick up the cordless polisher, you got your batteries loaded up, and if you’ve got a couple of spares and you can knock out the jobs in no time.

SEE ALL
Check Price on Amazon
9.5
Excellent!
Why we recommend
Pros Cons

This polisher feels really, really nice in your hand

It is very, very stout and very well built.

The trigger lock can be improved 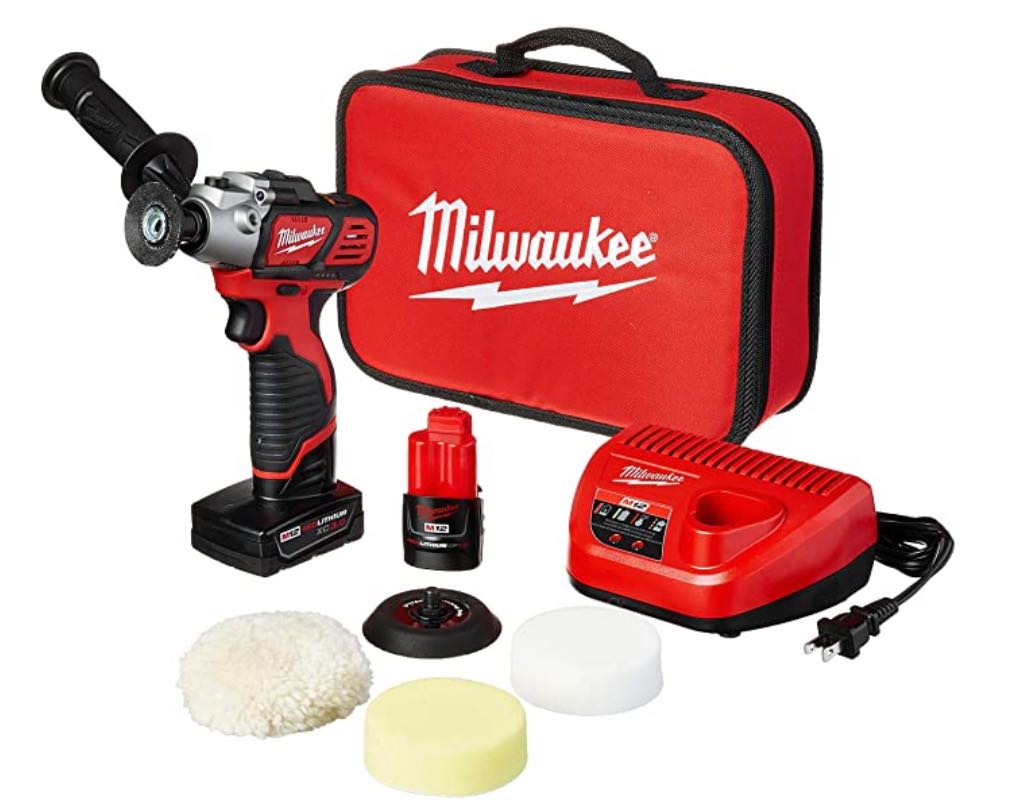 This kit comes with the soft shell case, which has a nice handle on the top, so you can carry it around and it will sit upright on its own. Inside the case you will find the cordless polisher itself along with a two amp hour battery already installed. There is the side handle right there, as well as an additional four amp hour high capacity battery, and then an M12 charger in the lid. You’re going to see three different polishing pads, as well as that polishing mandrel that will thread into the end of the polisher.

Milwaukee M12 has two different power or speed modes. Speed #1 is going to be 0 to 2,800 RPMs, which you would use when you’ll be polishing. And because it has a variable speed trigger, you can control exactly how fast the end is actually turning.

So if you want to go real slow, you can do that very easily. And then, if you want full power, which would be 2,800 RPMs, you also can do that. Now, let’s say, you’re not going be using this as a polisher and you instead are gonna be rebuilding engines. Let’s say you’re replacing head gaskets, maybe exhaust manifold gaskets, and you instead want to use roll lock disks.

Then you can do that with the included adapter. All you need to do is pressing the button on the top. That’s going to lock the spindle, and then you can just twist the end off very easily by hand, you’ll take the polishing pad right off, swap it out with the two-inch roll lock mandrel with a bristle disc installed. And now this is ready to go. But instead of going 0 to 2,800 RPMs, as you would with polishing, you’ll just flip the little switch up to speed #2. And now you’re on sanding mode. This is 0 to 8,300 RPMs. And once again it does have that variable speed trigger. So you can go very slow or you can go at full speed. 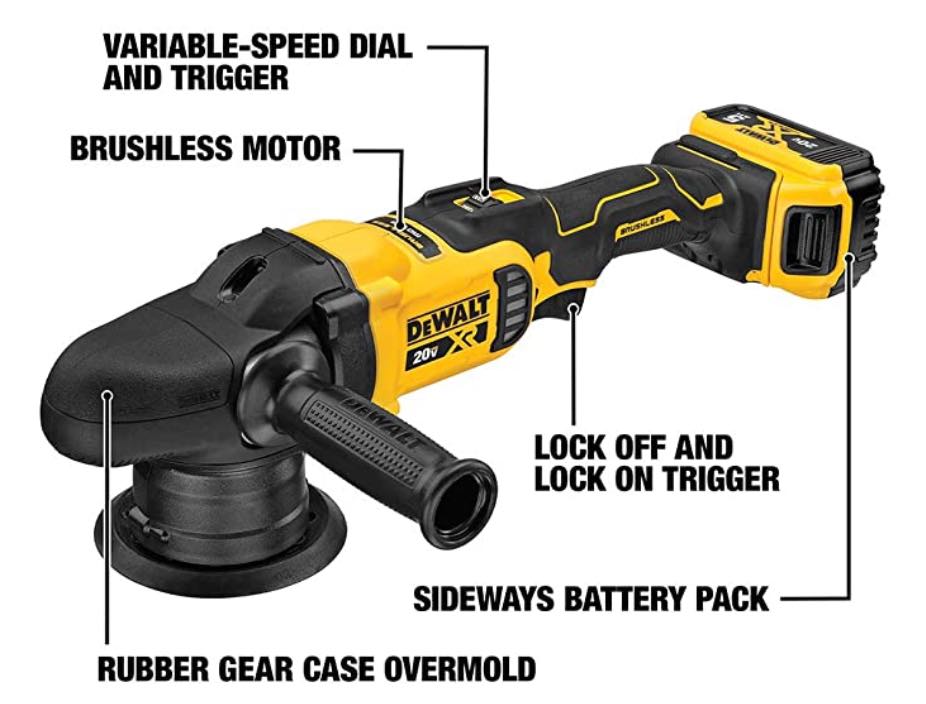 Now in my experience, 5 inches is perfect for cars and trucks. The 7 inches would be better if you’re moving up to large boats or anything that has a long flat surface, and we don’t see that on today’s cars.

This Dewalt polisher has a 15-millimeter random orbit diameter, thumb variable speed dial (You have a variable speed trigger and a dial for your maximum). Its brushless motor gives you the speed range of 2000-5500 OPMs and one 5 amp-hour battery can easily go through and do the whole truck.

Hi, my name is Steve and I'm a car detailing expert.... Read more

Cordless Polishers and Buffers
Affordable Buffers and Polishers
See All

How to Wax a Car?
Car Wax, Polishes, and Compounds
See All